Welcome to issue 2 which contains a selection of interesting and informative items. This remains an electronic newsletter, which is our preferred format on economic and environmental grounds. If there is demand, we will nonetheless consider making a small number of printed copies available in the future for those who prefer it.

On behalf of the Colyton Parish Council I would like to publicly acknowledge and praise the extraordinary resolve and collective response of everyone in Colyton and Colyford in the face of the unprecedented challenges posed by the COVID 19 pandemic. In particular, those in the frontline of the NHS, the care sector, essential workers and the army of local volunteers who have selflessly stepped in to provide support to the most vulnerable and isolated members of our community. Your innovation, stoicism and enduring resolve have been truly inspirational. So to each and every member of the Parish who has held out a hand of support to their friends and neighbours, thank you. Andrew Parr Chairman


VITAL SUPPORT AT A CRUCIAL TIME 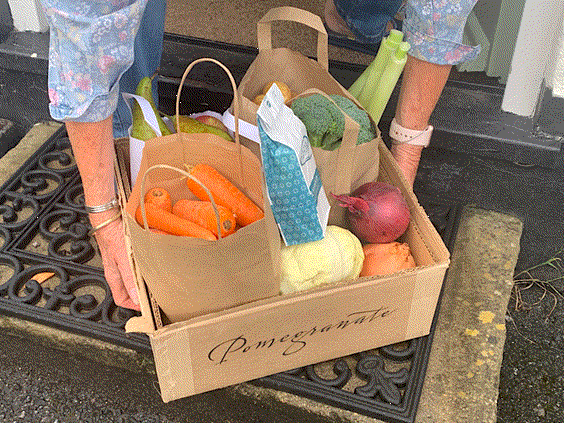 Teams of over 100 volunteers have done a magnificent job in supporting those in Colyton and Colyford who have been self-isolating during the COVID-19 pandemic. Local, bespoke support networks were quickly set up by Anne West in Colyford and by Sue Brown and Liz Berry in Colyton. Local businesses provided valuable additional support as did many other organisations and individuals. From friendly phone calls to deliveries of food and prescriptions, the parish has mobilised to make local life work. Gratitude has been expressed not just by those who received support but also by relatives at a distance whose minds were put at rest. Very well done to every single one of them. 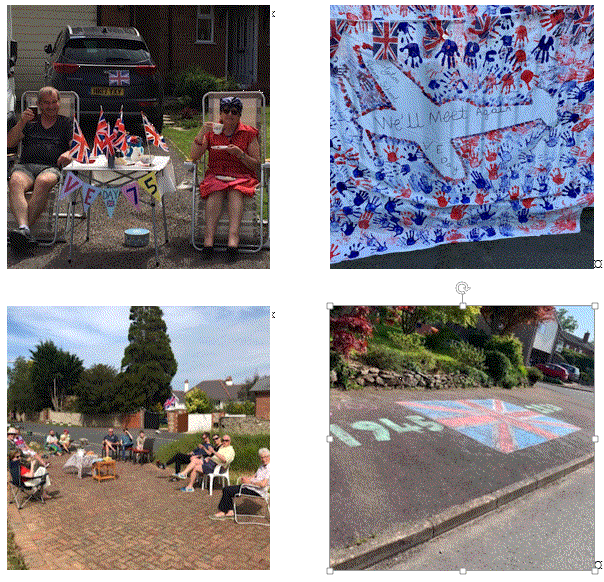 It takes more than a nasty virus to dampen community spirit in this parish! Our round-up of photos shows just a few of the celebrations that were mounted to celebrate the 75th anniversary of VE Day in May. Well done everyone! 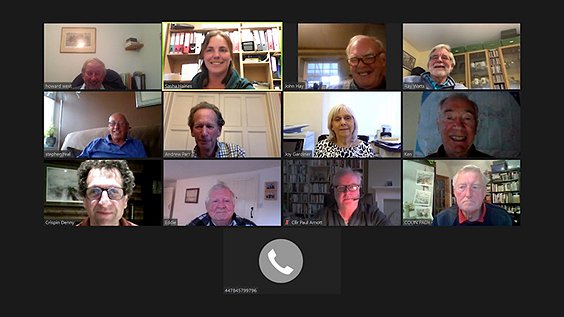 The Parish Council has had to make adjustments to its normal ways of working in order to be 'COVID' secure. These include: • Closing the office to members of the public unless attending by pre-arranged appointment. • Postponing the AGM until a future date – council officials will remain in post until 1 April 2021 or until an election can be held, if earlier. • Postponing the annual survey of council-owned property until it is safe to do so. • Convening all meetings via video conferencing until further notice (as per the photo above). Members of the public can still attend either by video (Zoom) or by voice only. Details of how to do so are published on each agenda. All these measures are being kept under constant review and will be adjusted as necessary in line with latest Government advice.

POLLUTION OF THE RIVER COLY 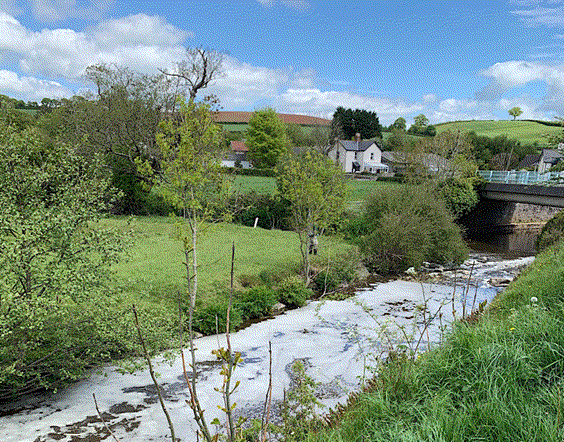 The Environment Agency (EA) is continuing to investigate a serious pollution incident near Colyton after a local farmer reported the loss of 100,000 litres of slurry from a storage tank on 2 May. The slurry entered the Southleigh Stream, a tributary of the River Coly and River Axe, and a large number of fish have died. Approximately 10km of river was affected by the spill but the Umborne Brook, which joins the River Coly at Colyton, helped dilute the slurry and significantly reduced the downstream impact. The EA surveyed the fish and invertebrates in Southleigh Stream and River Coly immediately following the incident and is now comparing the results to previous monitoring data to assess what the longer term impact might be. In the meantime, the site of the spillage has undergone extensive clean-up action and we understand the EA is still considering potential enforcement action in line with its enforcement and sanctions policy.

The latest version of the Colyton Parish Neighbourhood Plan has completed its independent environmental assessments (Click Plan). This now opens the way to the final public consultation stage, which will run from early September to mid October. During that period you will be able to view the plan in its final draft form on the Parish Council website. Paper copies will also be available from the office. Comments will then be collated and any necessary amendments made before the Plan is put to to a local referendum by May 2021. A simple majority of those voting is needed for the Plan to be adopted. 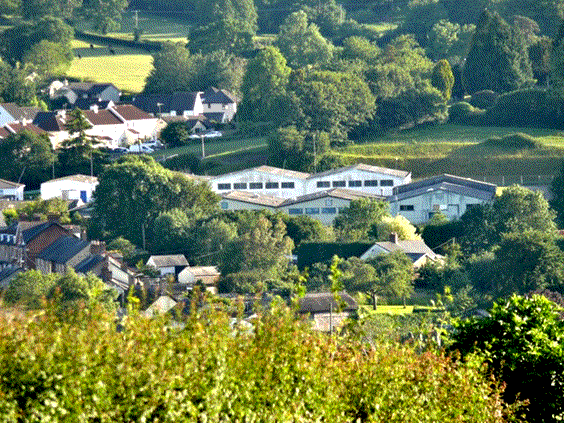 Outline planning permission has now been granted by East Devon District Council for the redevelopment of the former CeramTec site. The permission is for 72 homes in a mix of one, two and three-bed apartments and houses. Applicant Homes England says they will be of a high quality design in keeping with the character of Colyton. The outline permission has been welcomed by the Colyton & Colyford Community Land Trust, which hopes to work with the developer to deliver about 14 affordable homes.

BUSINESSES COMING OUT OF LOCKDOWN 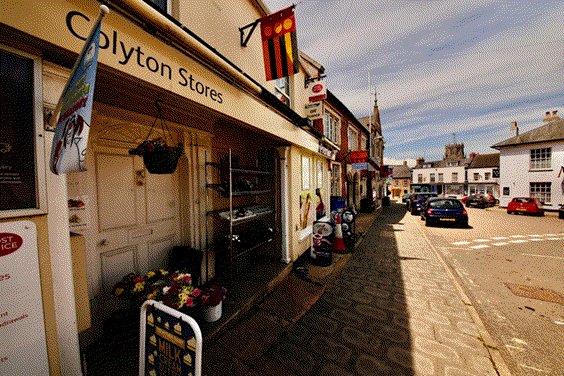 Colyton’s businesses have faced dramatic change through the pandemic and are in need of community support as they emerge from lockdown. The verdict comes from Parish Councillor Crispin Denny who has contacted a range of businesses to assess the impact. He says that ways of working have either changed remarkably or ceased, with staff working from home or furloughed, products and services diversified, with owners using government and supplier support where available. Some have used the time to renovate premises and others have enjoyed an improvement in turnover from an increase in buying locally. After lockdown, business will not necessarily return to ‘normal’, with some staff continuing to work for home, and potential redundancies needed to cover lockdown costs. For some, social distancing rules, unless changed, would make re-opening impractical. “Most hope to survive, though often in a more diversified and flexible way,” says Cllr Denny. 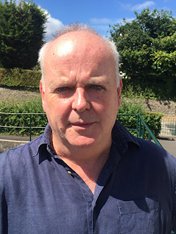 Colyton councillor Paul Arnott has taken over as the new Leader of East Devon District Council. The 60-strong council is now being run by an administration of 31 councillors from both the Democratic Alliance and the Independent Progressive Group. Cllr Arnott was elected to both EDDC and Colyton Parish Council in last year’s elections. He works as an author and TV producer. 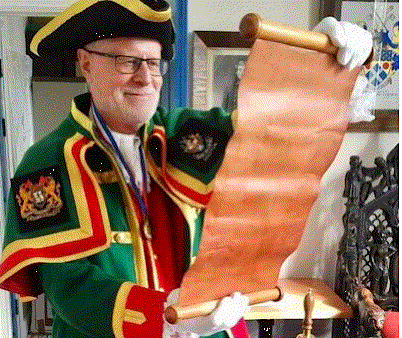 New town crier. Welcome to Colyton’s recently appointed Town Crier, Brian Norris. The Colyton Chamber of Feoffees appointed Brian last November to replace Derek Wenn, who hung up his robes after 15 years of service to the community in 2018, but as yet he hasn’t had the opportunity to stride the streets in full regalia to cry out the latest proclamations. Brian is a social entrepreneur using archive film-based reminiscence resources and services including the Tea & Memory Groups in Colyton and elsewhere. He is looking forward to donning his colourful robes and ringing the bell in the not-too-distant future. Good luck, Brian, and here’s hoping it won’t be long before we see and hear you on our streets!
https://www.living-memories.net/


DIGGING IN TO RELIEVE THE FLOODS 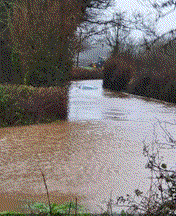 Flooding in Cownhayne Lane cost this and other motorists dearly during the February flooding. But when the going got tough, two particularly plucky parishioners got going with their own solution by digging out the blocked ditches. A big thank you is due to Graham Pady and Parish Councillor John Hay (equipped with digger and shovels) who cut in where Devon Highways did not. Let’s hope the exercise does not need to be repeated. 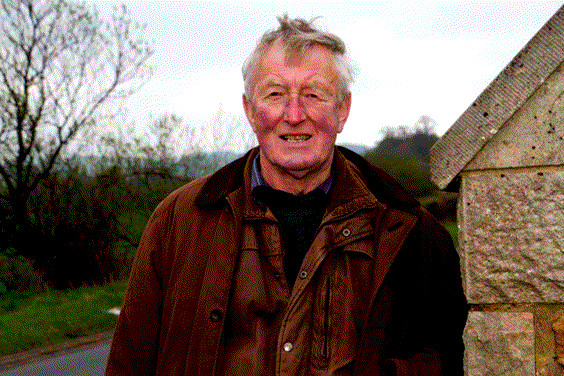 Colin Pady was born in Colyford and was a dairy farmer there for 45 years, bottling and delivering milk to Colyford and Seaton. He became a parish councillor in 1970, the same year he was elected to the Colyton Chamber of Feoffees, and has served continuously to this day. As Mayor of Colyford 1980/83, Colin was a founder member of the Colyford Goose Fayre in 1980 and acted as its Chairman for 10 years. He was also Chairman of Holyford Woodland Trust 2002-13, a founder member of Colyton Parish History Society in 1986 and its Chairman for 10 years, and currently serves on both the Neighbourhood Plan Steering Group and Colyton & Colyford Community Land Trust. Congratulations Colin! 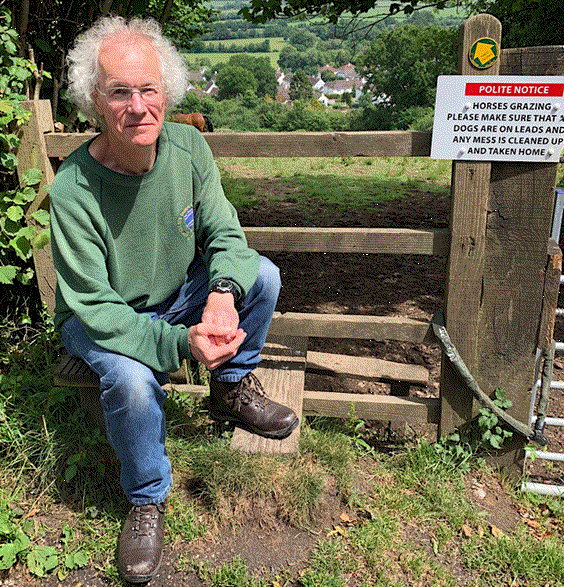 Amongst the many joys of living in Colyton is the fact that you have some real ‘gems’ of footpaths at your disposal - and some stunning views. The ‘gems’ description comes from Roger Swann (pictured), who is one of a small team of volunteer footpath wardens who support the Parish Council in keeping them in first class condition. Roger, along with Tony Williams, Phil and Vikki Bayliss and Jasmine and Mike List fulfil an important role in regularly walking the paths and reporting problems such as broken gates or stiles, fallen trees and unsafe footbridges. The Parish Council in turn reports the issues they raise with Devon’s Public Rights of Way team for action. “I love walking the paths and get out for an hour-and-a-half every weekday morning come rain or shine,” says Roger. “It keeps me fit and in touch with nature.” No-one knows Colyton's footpaths better than Hugh Dyer-Westcott. Hugh was evacuated to Colyton in 1944 and, when he returned in retirement four years ago, decided to give something back for the kindness shown to him then. In the years between, Hugh had become an expert on public paths and walking. He has led commercial walking tours all over the country, written books, articles and guides. He has walked throughout mainland Britain and says there is nowhere better than right here in East Devon. In coming issues, Hugh has kindly agreed to share his joy of the local paths. He will highlight the ones he loves and provide a useful insight into footpath law.

ROLL OUT THE BANNERS 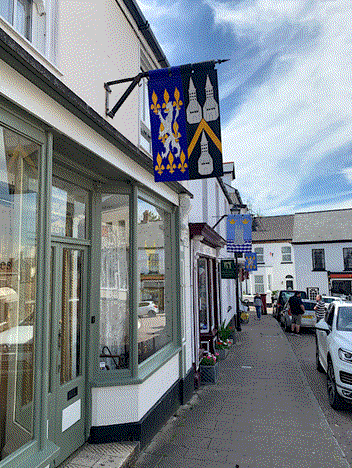 Summer was heralded again this year by the Promote Colyton Group’s colourful banner display. Launched in 2014, the initiative uses 36 heraldic banners representing families that have been important to the history of the parish. The banners were researched, created and hand-painted by the group’s talented volunteers … and what a cheerful splash they make at a difficult time! They will remain in place until September.